As preparedness for this fire season ramps up, new Forest Fire Management Victoria firefighters are learning the fundamentals of the job this week at a training camp in Licola, 50 kilometres north of Heyfield.

“Project firefighters have a critical role in fire response. It is important they have the skills to do the job at the frontline of bushfire control, as well as know how to keep themselves and their mates safe,” Mr Gray said.

“Training is delivered by experienced firefighters and trainers through a mix of classroom and fieldbased learning.”

“The camp also provides an opportunity early in the season for the new recruits to get to know each other as well as the more experienced local staff they’ll be working with throughout the season.”

“At the completion of the camp, the project firefighters will return to their work centres to undertake additional training and accreditation, including four-wheel driving and hazardous tree management.”

“They will also be available for deployment within the Gippsland region, across the state, and interstate for emergency response.”

The Spring 2016 Firewood Collection Season will close across Victoria on Wednesday (30/11/16).

Forest Fire Management Victoria - Regional Manager Forest and Fire Operations Peter Kambouris said: “From Thursday 1 December, 2016, all designated firewood collection areas will be closed over the Summer period, and it will be illegal for people to collect firewood on public land until the start of the Autumn Firewood Collection Season.

“Firewood collection may already have ceased in some parts of the state where supplies are exhausted or where rainfall or flooding has affected track conditions making collection unsafe,” Mr Kambouris said.

“The public will be able to start collecting firewood again from designated firewood collection areas from 1 March, 2017, pending suitable conditions.”

Forest Fire Management Victoria staff will be patrolling parks, forests and reserves to ensure people are doing the right thing.

Firewood collected at these sites is for personal use only and cannot be sold.

Typical on-the-spot fines are around $622 and for offences that go to court, a person may be liable for fines up to $7773, one year imprisonment or both.

To find your nearest firewood collection area or for more information and updates visit www.delwp.vic.gov.au/firewood, your nearest DELWP office or call the Customer Service Centre on 136 186.

Any information the community may have about the illegal removal of firewood for sale can be reported to DELWP on 136 186 and quote ‘Operation Axe’. 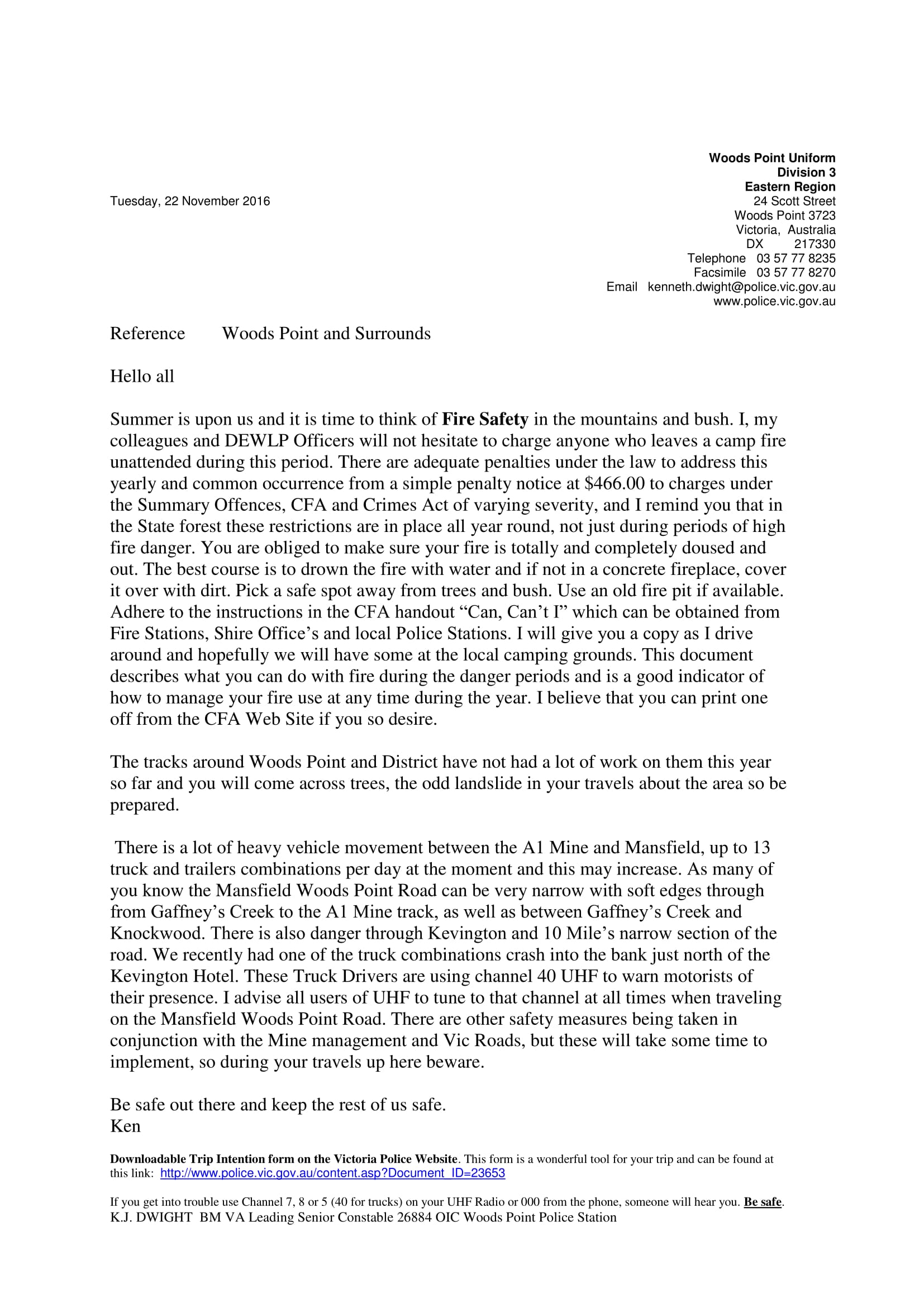 VicRoads advises drivers of necessary nightworks on the Great Ocean Road, east of Separation Creek, on Monday 28 November.
All townships along the Great Ocean Road will remain open for business, accessible via inland routes.
Traffic controllers will be stationed at Lorne and Skenes Creek during the works to explain detour options, most likely via Deans Marsh and Forrest.
Limited local access from Lorne to Cumberland River and Skenes Creek to Separation Creek will also be available.
Maintenance crews will close the road at the landslide site 500m east of Separation Creek from 9pm on Monday night to 5am Tuesday morning to repair pot holes on the east-bound lane, adjacent to the current workzone.
The surface is deteriorating due to increased traffic volumes and construction plant impacts.
VicRoads has scheduled the critical nightworks to ensure the road is repaired before Friday 2 December, when the Great Victorian Bike Ride will travel through the area.
We encourage drivers to plan ahead, observe roadside signage and detours and allow extra travel time.

Fleur Smith, Parks Victoria Senior Ranger accompanied her 15-member team from the Mansfield Four Wheel Drive Club to focus their efforts on track clearing 16 Mile Jeep Track, from Bindaree Flat to Pikes Flat and Bluff Link Rd, as well as tracks around the Craig's Hut area to ensure key attractions could be accessible.

The groups were also accompanied by incredible volunteers led by Tim Bates from 4WD Adventures. Their efforts alone contributed the equivalent of 147 volunteer hours.  They installed signs and bollards, cleared tracks and collected rubbish around Bluff and Lovick hut sites, as well as collected firewood for both huts.

“Once again, we were very lucky to be invited by Parks Victoria to assist with track clearing. This was our sixth year and we were able to put 15 volunteers on the ground.   All of our members find it a very rewarding experience and a privilege to be allowed into the restricted areas before they are opened to the public.”

“Wangaratta 4WD Club had a number of members attend the track clearing weekend commencing at Whitfield to clear some of the main tracks between Whitfield, Pineapple Flat, Lake Cobbler and King Hut in readiness for the upcoming track opening.”

“Although surprisingly there wasn't a large number of trees to be cleared, some tracks were impacted by the heavy winter rainfalls we have just experienced and there are a number of soft spots on some tracks which may prove impassable for some.”

“To work with Parks Victoria was a great experience for our members and gaining an understanding of some of the issues that they face in the management of the park with many different user groups having different needs and many different issues to control.”

“Being involved in the project was fantastic, all the guys were keen to be involved and we look forward to more working bees in the future.  It was great working with the teams, it just wasn’t about work, but it was fun too.”

As listed below we have some temporary closures in the Upper Murray District, which may be of interest for your members/clubs.  The details are shown Below;

Duration: (indicative only, and may vary slightly); 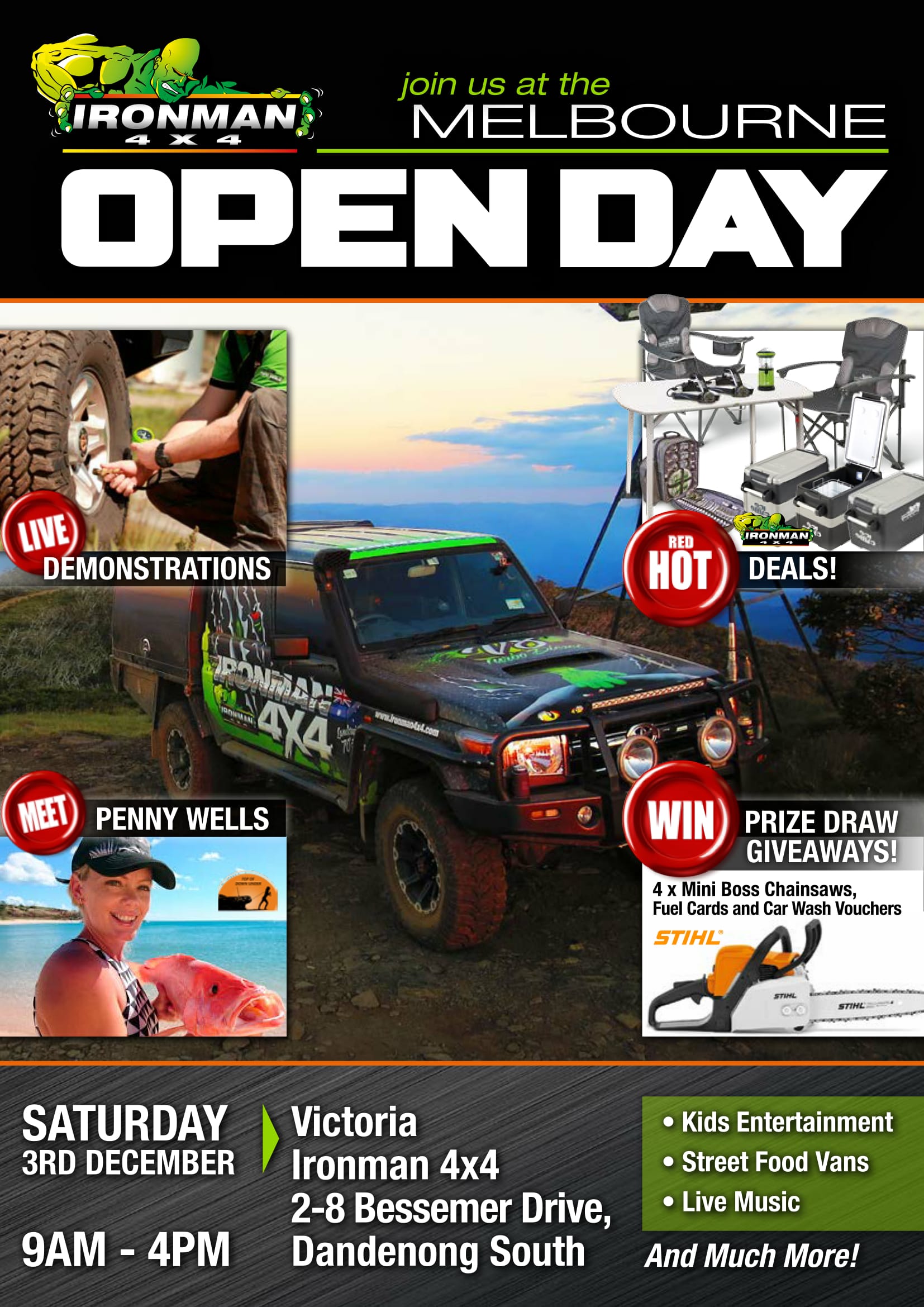 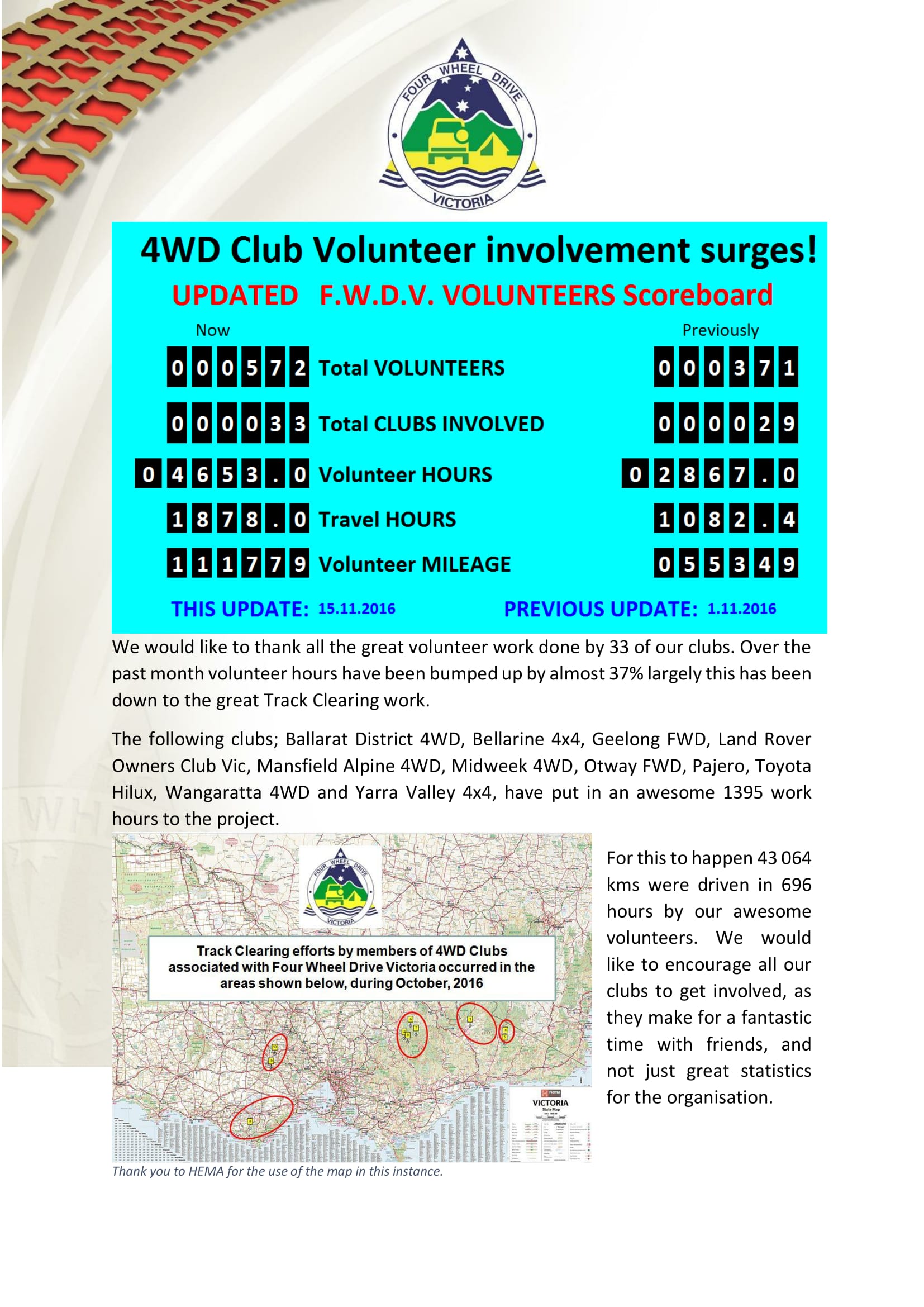 Construction has commenced at the site of the new fire tower at Mt Barambogie, near Chiltern.

The major project will see the construction of the new tower which will provide fire detection across both public and private land in the Indigo and King valleys.

Forest Fire Management Victoria’s Assistant Chief Fire Officer - Hume, Gill Metz, said: “While above average rainfall has delayed the commencement of works, we are still working hard to have the fire tower operational as soon as possible.”

“Through our engagement with the community we understand that having the tower operational is important and we are doing everything we can to make that happen,” Ms Metz said.

“Because of the rainfall, heavy machinery has not been able to access the site until recently.

“Site clearing and access track works have commenced, however, any additional rainfall may impact on the timing of completion of the project.

“The tower and cabin are being built off-site and will be ready to be installed when site preparations are complete.

“Fire towers play an important role in the early detection of fires. Early detection is critical to responding to incidents and containing fires before they have the opportunity to spread and impact communities and the environment.

“Working with the CFA, we use a range of fire detection methods including aircraft and on-ground patrols to ensure a quick response to any fires. Members of the public also report many fires via the increased use of mobile devices.

“The new fire tower at Mt Barambogie replaces the Mt Pilot fire tower, which did not operate during last fire season due to its lightning protection system not meeting current Australian standards.

“Mt Barambogie is located within the Chiltern-Mt Pilot National Park and is nine kilometres to the west of the Mt Pilot tower.

“The new tower will replicate the view of the Mt Pilot tower closely and will have improved viewing into some areas.”

Forest Fire Management Victoria operates a network of 72 fire towers, located strategically around the state to ensure maximum coverage of Victoria’s parks and forests. This includes 16 towers in the Hume Region.